The Australian federal election 2022: what can we learn?

What can progressive forces in other countries learn from Australia’s election, as they strive to wrench back power from ‘far right populists’ who’ve upended mainstream politics and policy right across western liberal democracy? Karen Stenner has answers

Editors’ note: You’ve probably heard about last month’s extraordinary upheaval in the Australian political landscape – when an increasingly ‘right-wing populist’ Liberal/National Party Coalition led by Scott Morrison was dealt a resounding defeat in the Federal Election after nearly a decade of divisive rule, at the hands of the centre-left Labor Party, the Greens (and their ‘preference flows‘), and a number of ‘community independents’ dubbed ‘Teals’ by the media.

The Teals – so named for being both economically conservative (i.e., blue) and socially progressive (not least on green issues) – attracted particular attention: all highly educated, successful professional women, they clinched some crucial seats from the Coalition.

The story of what happened offers vital lessons for change-makers all over the world, and we’re delighted that Karen Stenner – acclaimed political psychologist, author of The Authoritarian Dynamic, and a previous guest on the Larger Us Podcast –  has written this guest blog post for us.

We asked Karen: what can progressive forces in other countries learn from this success, as they strive to wrench back power from ‘far right populists’ who’ve upended mainstream politics and policy right across western liberal democracy?

In overview: I was particularly struck by the manner in which both Labor and the ‘Teals’ deftly defused what I have called “the authoritarian dynamic”: the activation of underlying predispositions to authoritarianism through the creation or manipulation of “normative threat”. This sense of threat typically centres on (perceived) loss of shared identity and values – feelings of “oneness and sameness” – together with loss of confidence in leaders and institutions.

It seems they accomplished this feat, first, by simply refusing to accept – or even respond to – the normative threats ginned up by the Coalition, and second, by creating a reassuring alternative “normative order” to which Coalition supporters – tired of being invited only to constant fear and anger – could transfer their allegiance.

In creating this alternative normative order, both Labor and the Teals successfully exploited the opportunities created by the cross-cutting pull of conservatism and authoritarianism (see framework below), which can also be described as the disconnect between economic and social-moral conservatism.

Readers wishing to better understand the evidence underlying these claims – regarding both the distinctions between authoritarianism and conservatism, and the mechanics of the “authoritarian dynamic” – might want to explore more of my research here. But I trust that the following distillation of just a handful of the critical strategies in this election victory might be sufficient to illustrate the dynamic. 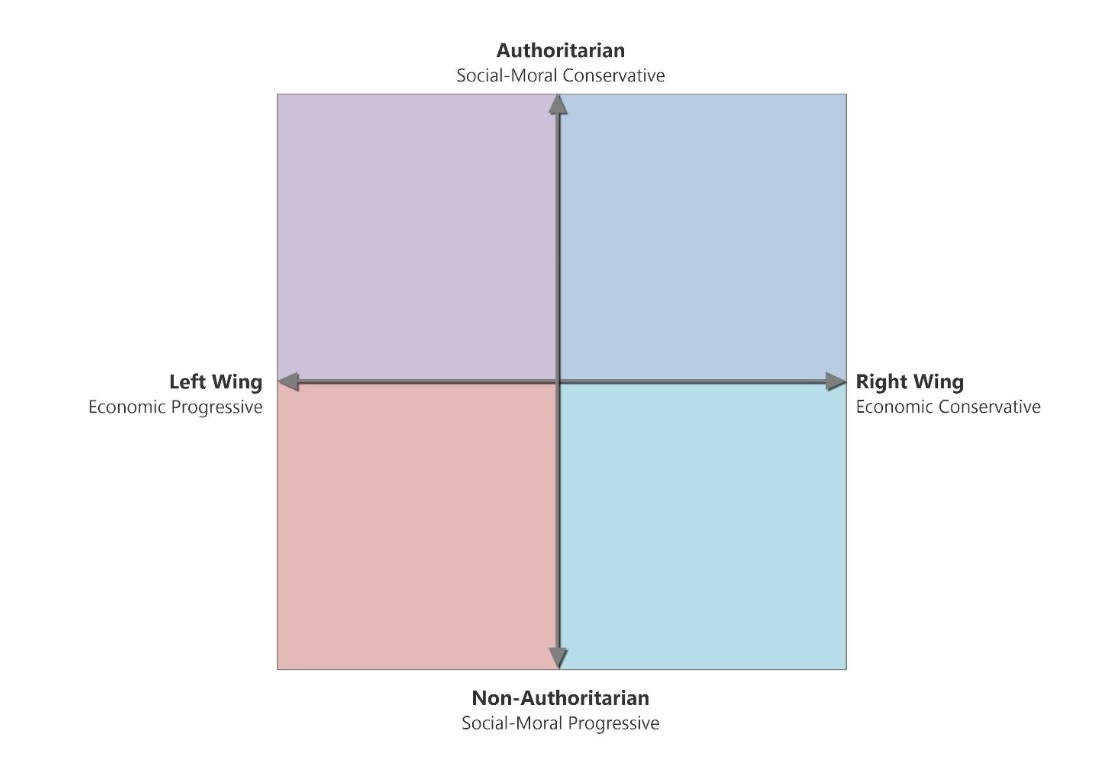 Late in the campaign, when their prospects looked dire, Morrison appeared to make a strategic decision to set off a ‘culture war’, evidently hoping to fire up the authoritarians in the Coalition’s base, which for decades now (like many ‘right wing’ parties across the West) has hosted an uneasy alliance between conservatives and authoritarians (i.e., economic and social-moral conservatives).

In a controversial “captain’s pick” over the objections of Liberal Party ‘moderates’, Morrison selected Katherine Deves, a loud and proud critic of transgender rights, to run in a socially progressive, inner urban Sydney seat. He then allegedly directed Deves’ performative campaign from within the Prime Minister’s Office (PMO), needling and provoking this and other electorates with the candidate’s outspoken alarm at adolescent “gender reversal surgery” (something that never happened) and the threats purportedly posed by trans women to the safety of women and girls.

All of this was predictably illustrated with some vigorous ‘offence-mining’ (allegedly involving the PMO itself) of Deves’ record of incendiary social media posts (e.g., about trans children allegedly being “surgically mutilated and sterilised”).

Even in this brief history, we can see the readily identifiable contours of the kind of ‘culture war’ regularly launched by ‘far right populists’ around the globe, centred on one of the archetypal wedge issues that fuel these wars. These provocations generally aim to activate authoritarians’ fear of (all kinds of) difference – moral ‘deviance’, political dissent, and racial/ethnic diversity – with classic ‘triggers’ like loss of shared identity and values (in this case, around moral ‘deviance’).

In practice, though, Morrison’s cynical move ended up burning the Coalition itself, not least because Deves’ fixation on the horrors of transgender women in sport was met with quiet disdain by her opponent Zali Steggall, one of those famous Teal candidates: herself a former Alpine skier and medal-winning Olympic sportswoman.

More generally, it had the effect of gagging, and souring the prospects of all those ‘moderate’ Liberal men, themselves confronting strong Teal candidates in their own, now rather aggravated inner urban electorates. These men now had to face down calm, immovable female opponents who had the luxury of just holding true to their progressive views, or avoiding the trans controversy altogether.

The attack on racial/ethnic diversity: turning back asylum seekers

In regard to the other flashpoint issue of racial/ethnic diversity, another pointed provocation came on Election Day itself. The Coalition government’s Home Affairs Minister, Peter Dutton (now Opposition Leader), had his office send out an extraordinary text message to voters in marginal electorates nationwide, alerting them (inappropriately, and certainly unnecessarily) that an asylum seeker boat had been turned around at sea and sent back to Sri Lanka. Some even allege this performance may have been pre-planned and coordinated with Sri Lankan authorities.

As noted, issues around racial/ethnic diversity – including immigrants, refugees and asylum seekers, as well as ‘domestic’ minorities – are reliable triggers for authoritarians. And the Coalition’s hard-line ‘turnaround’ policy (and its companion: offshore asylum processing) had been a veritable lightning rod in this highly contentious issue domain.

However, yet again, Labor allowed this action to pass with little comment, even though it likely violated the norms of the campaign period in which leaders generally avoid making (or at least publicising) governmental decisions with partisan implications.

As with trans issues then, the Coalition seemed determined to activate voters’ fear of difference and perceptions of normative threat. But they were foiled, every time, by opponents that simply refused to engage with it. While the Coalition practically begged Labor to enter the fray, on each occasion both they and the Teals largely abstained from wading into this trap.

Voters of authoritarian predisposition (who generally constitute about a third of the population, everywhere we look) find diversity and complexity highly discomforting, and attach themselves to leaders and parties who promise to vanquish it.

Yet at some point, right-wing provocations about racial threats, immigrant hordes, criminals, deviants and dissidents – when endlessly invoked but seemingly never eased – can create an unbearable climate of discord and confusion, fear and anger, from which authoritarians might then seek to escape.

Understanding that authoritarians can be activated or de-activated – can be threatened or reassured – is key. The experience of this election shows the limits to the standard ‘far right populist’ strategy, and the opportunities that this strategy creates for enterprising opponents.

While these voters’ socioeconomic status might traditionally dispose them to economic conservatism, their cosmopolitan outlook also inclined them to a green-tinged social-moral progressivism, and a vision of a kinder, greener, safer world (see bottom right quadrant of the framework above). Fossil-fuelled wars and natural disasters likely clarified that vision, after years of deadly bushfires, drought and floods. This presumably left them increasingly uncomfortable with the triumph of ‘dry’ over ‘wet’ within the Coalition, its denial of climate change, and a leader whistling loudly to the worst impulses of the ‘far right’.

But in 2022, these urban cosmopolitans with cross-cutting inclinations now had the option of the Teal independents – a kind of half-step away from their purported class interests, with no obvious placement on the left-right spectrum – led by an impressive array of warm, visionary professional women.

Labor, too, very consistently throughout the campaign, created a compelling “normative order”, offering a comforting alternative to what many perceived to be a confrontational, disrespectful, scandal-plagued government, which had now sunk to a frantic and manipulative scare campaign.

Whether or not by design, our now-Prime Minister Albanese created – partly via his calm, straightforward demeanour – a wave of “normative reassurance” for an exhausted, angry and fearful electorate. He carefully composed, and quietly shared – with what felt like heartfelt sincerity – a simple vision of a united Australia, which studiously avoided all the culture war ‘flashpoints’, but unashamedly sought to nurture strong feelings of national identity.

Albanese explicitly positioned himself as someone who would govern for all, pointedly including those who did not support him. Most importantly, his campaign recalled us often to core national values that resonate deeply for all Australians, especially the central value of fairness – the idea that “we’re all in this together” and that true Aussies “give everyone a ‘fair go’”.

Ultimately, my sense is that Labor successfully called back ‘home’ some of their ‘natural’ working class constituents who had drifted, over the decade, off to the right – whether to the Coalition, or an assortment of ‘far right’ minor party alternatives – on account of their moral traditionalism (see upper left quadrant of the framework).

While many doubt the existence of “left-wing authoritarians”, evidence suggests that those who want big government to intervene in the economy – to redistribute wealth and enhance equality (a form of “oneness and sameness”, after all) – are also often uncomfortable with diversity and complexity. What Labor did so well in this election was create and speak to those feelings of oneness and sameness, but without the siren song of racism and intolerance (it turns out it’s not an inevitable accompaniment).

Even in these first weeks of government, in both domestic and foreign affairs, Albanese has taken every opportunity to affirm that cooperation and collaboration make us stronger, not weaker. What happens next would ideally include contentious racial and moral issues being negotiated quietly – their sore points not constantly prodded and exposed – and great pains being taken to couch potentially divisive policies in the language and values of the other ‘side’: dignity, honour, respect, loyalty, security, certainty and strength.

If this feat can be accomplished, we can confidently predict continued electoral success for the Labor party in Australia, and expect to see similar political strategies now pursued right across western liberal democracy.

Want to find out more?

Larger Us is designed to be co-created by everyone who wants to be involved.

A place to ask big questions, to exchange knowledge, to build our skills and to organise.

FIND OUT MORE ABOUT LARGER US

If you send us your details we’ll add you to our mailing list so you can keep up to date with our activities and events. We’ll only email you about once a month.